Paul Rochell wrote this awesome tale – thanks, Paul! Do you want a $25 gift card to Smith & Edwards? Send your hunting story (at least 2 paragraphs) & photos to info@smithandedwards.com by Nov. 15th, if we publish your story you’ll get a gift card!

This is my second bull elk, the first was a general season elk tag. This 6X6 bull was a limited entry Manti tag that took fifteen long years to draw.

After several trips this summer scouting for elk, my cousin found this bull two days before the hunt opened and was able to video the bull with his phone skope.

Opening morning me and several of my family (Wife, 2 sons, grandson, brother, 5 cousins, uncle, and 2 aunts) surrounded the canyon the bull was spotted in trying to get another look. My brother spotted the elk, but by the time I got to him, he slipped into the pines. Later that evening, my son Jory and his family watched the canyon to make sure the elk stayed there and that nobody else was after him. In the meantime, me and the rest of the family were checking several other canyons looking for other elk we had seen during the summer.

After returning to camp that evening, we sat around compared pictures and decided this bull was well worth taking. The next morning we all set up around the canyon in search of this bull. With no luck spotting him, we knew he was still there from his distinct bugle. So rather than trying to sneak in on him, I decided it would be best to wait until evening.

Early that afternoon myself and all of my family surrounded the canyon again. A short time later my cousin Markus had the elk in his sights, so I quickly moved into position. After a few bugles the elk walked into a small opening and presented me with a shot. But after the first shot, the elk quickly disappeared.

At this time we were not sure if I had hit the elk. A short time later (which felt like hours) the cows walked back into the same clearing… followed by the bull.

The second shot was definitely successful. When the bull hit the ground, we quickly followed up with yelling and screaming of happiness. This indicated to the rest of the family scattered around the canyon that the bull was down.

This hunt was the greatest hunt of my life due to the fact of my wife, sons, grandson, and the rest of my family were there to be a part of it. I carry some good memories of this hunting area because it was also the same limited entry unit that my dad waited 14 yrs to draw at 75 years old. I was fortunate enough to join him on his successful lifetime bull elk hunt in 2011 a couple years before he passed away in 2014, and I’m sure he was cheering along with the rest of the family. 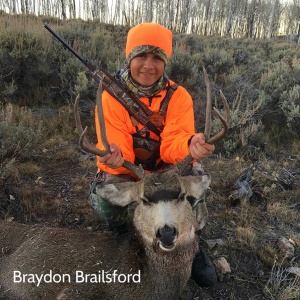